I have a long track record of coming late to parties.
I didn’t see Chris Nolan’s Inception until 2013, the Bourne Series until 2015, John Wick, same year. Haven’t seen Iron Man, Captain America or any of the Avengers series (okay I saw Spiderman. Can’t remember when or anything on it however) and currently I don’t know if I have any intention of seeing Infinity Wars.
Black Panther remains the only party I came early for- 3 weeks after it hit cinemas.

So, this is classical me coming late yet again.

Stumbled on this view a few hours ago. 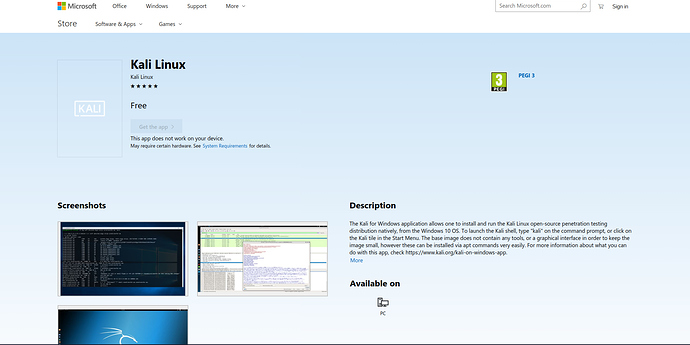 Kali Linux can now be downloaded as a desktop application from Microsoft’s store!
Isn’t that great news?!
Forget that this was published since February, I found out only last night and my excitement would not. be. less!

Kali Linux now joins four other Linux distributions on the store. It can only be downloaded on Windows 10 however (this owes to the Windows Subsystem for Linux feature present only on the flagship OS)

Here are four simple steps for doing this:

You can now go on Microsoft.com and search “Kali Linux.” Download and install as any regular desktop app.
And you have Kali on the fly

for your Windows Machine

Same here @Handerous I am quite notorious for coming late to “parties” my self. Thank you for sharing this update - however late it is, we don’t care, we love this update!!!

Too bad though, that its only Windows 10 that can use this desktop app. Some of us are still stuck with Windows 8.1.